Boys and Girls Club of Fitchburg and Leominster 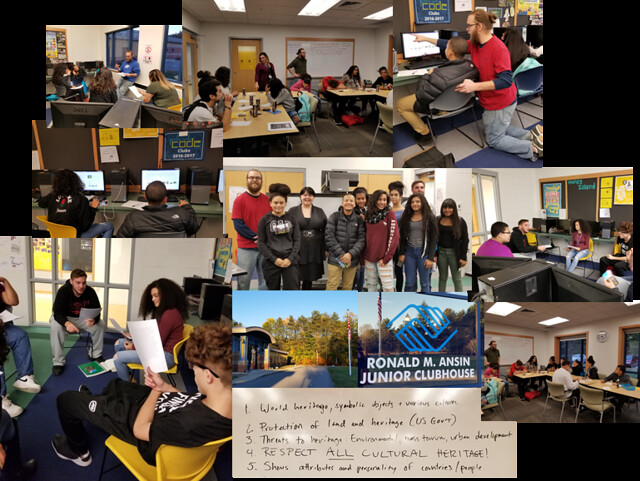 Throughout the three sessions spent at the Boys and Girls Club of Fitchburg and Leominster, I learned about my own cultural heritage project and took a glimpse into my future as an educator. Both of these things are extremely valuable to me, and they would not have been possible without the great students we worked with. As each week narrowed in focus for the students, they seemed to grow more and more interested about their topics and my expectations of their work were met with flying colors. Perhaps the most rewarding thing for the students was the chance to examine their own cultural heritage and examine what was important to them. They were also able to explore some places of interest within their local areas. Above all, I got another taste of what being a high school teacher will be like, and I will likely use a lesson like this in my future.

The first week at the Boys and Girls Club had students thinking about what cultural heritage was and what it meant to them. Students came up with great ideas, many abstract and challenging, about what certified as cultural heritage: music, food, religion, literature, and artifacts were just some of the things students were thinking about. They then took the next step by thinking about their personal heritage and drawing them on playing cards. Many students who were of Hispanic descent observed the kinds of foods that their families typically ate or the music that was important to them. It was great to see these students embracing their ethnicities and recognizing their heritage. Students later would begin to look at the heritage of medieval cultures.

During the second and third weeks with the students, they began to do what our class had done for the "Cultural Heritage Project." Students used the same photos and places that we had in class and developed their own ideas on them. They then researched these places and learned a little bit about them. After this, Aaron and I took some of the students and led them in discussions about our own photos and then had them find similar local cultural heritage sites. In my group, students took a look at some cemeteries in Massachusetts that caught their eye. While their research on these places was basic, it would lead into their research for the next week. On the third week, students again examined cultural heritage photos and then found local sites that related to them. They also kept in mind the importance of these sites and why they would be considered cultural heritage. I was very impressed by how they were able to research these places and the rationale that they came up with for both sites. The students seemed to enjoy the time we spent with them and the lesson overall.

This kind of lesson on cultural heritage is something I would undoubtedly use as a future teacher. I believe it is important for students to embrace their cultures regardless of where they are from. It is also important that students recognize what cultural heritage is and why it needs to be preserved and protected. This project also helps students to develop research skills that will be vital to them during their educational careers. Overall, I was thrilled with the students' work and the ideas that they formulated and was proud to be able to work with them.

While taking a class at Fitchburg State University under Dr. Kisha Tracy, I was lucky enough to be included in a project regarding the importance of cultural heritage at the Boys and Girls Club in Fitchburg. This experience helped me realize just how much some teenagers care about their own culture. It was interesting to see the transition of some of their outlooks on the subject.

Our first of three days began with us getting to know the students along with a conversation that explained what cultural heritage is. After a few groups got together and read handouts about what cultural heritage brings to a society, we listed a handful of outcomes that society receives through cultural heritage. A few of the highlights from that discussion were that cultural heritage: shows attributes and personalities of countries and individuals, should be respected by all, and has different threats against it.

Blank playing cards were handed out so that we could make our own deck of cards explaining our personal pieces of cultural heritage. Some students chose to draw pictures of food they share with their family, some drew pictures of Christmas trees and crosses, and some drew music notes. This put something in their hands that they could think of on a more personal level  Imagining if some of those items and traditions were taken from them, they were able to empathize with individuals that had lost pieces of their cultural heritage.

Once that level of understanding was attained, we were able to move forward into relating different examples of cultural heritage from different parts of the world to our local area. Using a photograph of St. Mary’s Church at Oxford University taken by Dr. Tracy, students and I brainstormed as to what type of local sites we could find online that would parallel with the photo.  Our group decided that a local church would fit the bill. In the searches, students found four local Massachusetts churches that were similar to the photo that Dr. Tracy captured.

The following class was further research in order to tie in the local churches to Dr. Tracy’s photo even more. With the help of the students, I was able to examine more locations than I would have on my own. Their assistance in the research was not only helpful for the project, but also refreshing to see a group of young teenagers willing and excited to research regarding cultural heritage.  I think it was put best when one student told Dr. Tracy in reference to the number of classes, “Three of these just aren’t enough.” The project was more than enjoyable and left me with a smile on my face and hope for the future.